Before I talk about tomato soup let me show off another glorious bowl of overnight oats. Same basic recipe as before but I stirred in thawed frozen blueberries and added some sliced almonds on top. I could eat these everyday but Travis’ reaction to his second bowl in a week was, “Porridge again? I like my smoothie action.”

I love being able to use of TONS of what’s growing in my garden all at the same time! I think I overdid it planting cherry tomatoes because I have them coming out of my ears. In the past 2 weeks I have made gazpacho, a large version of a caprese salad with halved cherry tomatoes, basil and mozzarella all tossed in a homemade balsamic vinaigrette (that we shared with 8 friends) and we have eaten plenty of tomatoes sliced in sandwiches. My son and I picked another couple pounds of tomatoes yesterday and I was pretty excited to try a cooked version of my tomatoes.

Here are the tomatoes before going in the oven…

This soup is so flavorful! I made it with tons of halved cherry tomatoes with a few larger tomatoes…all from my garden. In the early afternoon I prepared the tomatoes, roasted them and then let them cool completely.

Then I blended all of them with my Vitamix. Because the recipe doesn’t tell you how to slice or dice the basil after I transferred the tomato mixture into the soup pot I blended the basil with some of the chicken stock and then added that to the soup. After the soup was done I used my immersion blender to puree the onions to make it completely smooth. I didn’t strain it as instructed.

Roasted tomato basil soup with some basil to garnish!

After we each had a good sized bowl with dinner there  was still enough leftover to fill an eight cup container! 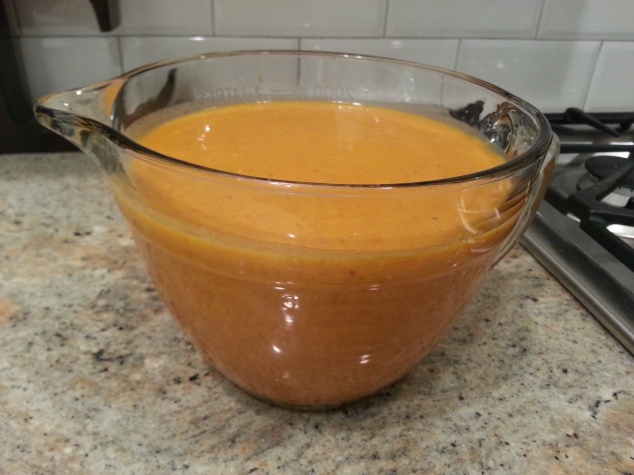